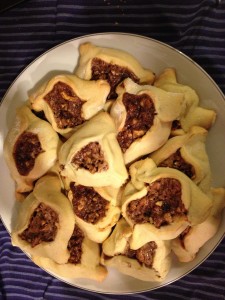 Last year our pecan tree had a bumper crop (enough to last us into this year as well).  We had bags of them lying in our home, and we were ever in search of new ways to incorporate pecans into our cooking.

As Purim approached, it seemed natural to try them in hamantaschen. Hamantaschen are three-cornered cookies baked in celebration of the Jewish festival of Purim. They are said to resemble either the ears or hat of the villain, Haman, who gets, quite literally, his just desserts by being turned into a pastry.  To pile on the puns, as we eat our hamantaschen, it’s a form of “sweet revenge.”

While hamantaschen are traditionally filled with prune or poppy-seed filling, fruit and chocolate fillings have become popular. For years our family filled the hamantaschen with chocolate chips.  Adding pecans seemed like a natural extension.

Tips for making your own chocolate chip pecan pie hamantaschen:


Warning: count(): Parameter must be an array or an object that implements Countable in /home/palmet16/public_html/wp-includes/class-wp-comment-query.php on line 399

One thought on “Chocolate Chip Pecan Pie Hamataschen: A Southern Twist on an Old Favorite”

A Reform Rabbi based in Columbia, SC


Warning: count(): Parameter must be an array or an object that implements Countable in /home/palmet16/public_html/wp-includes/class-wp-comment-query.php on line 399